I have never seen an owl, but I have seen pictures. I don’t remember if they ever appeared in my dreams. There they could come in many forms representing, so I’ve heard, good luck or bad or death or wisdom perhaps with the sprinkling of Merlin’s understanding of reality. Unfortunately, like most people, the scientific nonsense I believe in, without being aware of it, would still keep me from taking such dreams seriously. It’s really too bad. Maybe the owl has brought me bad luck through the back door? Maybe, because I refuse to take that deep, transforming breath and become as wise as those owls are said to be, I deserve all my current blindness? Maybe this, too, will all turn out well in the end?

Text: Linked to dVerse Haibun Monday. Victoria is hosting with the theme “owl”.

Photo: A winter scene in Techny Park from last year by the author. 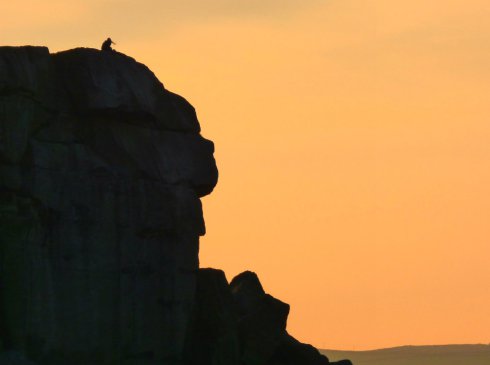 A fairy, Christine, lost her wings on top of a hill overlooking the glen while watching the orange sky accept the setting sun. She did not think she was so old. She picked up her wings sighing “Oh!” and stumbled down to the glen on foot aided by moonlight. The other fairies greeted her with relieved laughter since she was gone so long and then tears when they saw her wings. Her transformation had begun.

Sylvia came to wish her farewell. She told Christine about the completed transformation of her fairy-child that morning. She cried and Christine comforted her.

Samuel came to wish her farewell. He told Christine about the completed transformation of his fairy-wife that morning. He cried and Christine comforted him.

Rose, another fairy, a teenage one, came to wish her aunt farewell. Her father told her she had to. She looked into Christine’s eyes. “Look deeper,” Christine suggested. To her surprise Rose saw her own eyes gazing back at her. She cried and Christine comforted her.

A fairy without wings can remain only so long. Christine regretted not doing whatever it was she was meant to do but did not have the imagination or the will to realize. “May I look into your eyes?” Rose wiped away the tears. When Christine looked, they both smiled.

The chain of inspiration comes from Jane Dougherty’s challenge to write folk tales based on Jeren Nazuto’s poem responding to Jilly’s poem based on Jim Harrison’s “fragile wings”.